The winter of 2012/2013 delivered a roller coaster of temperatures mixed with inconsistent precipitation.  The unusually warm weather of December allowed for an extended period of outdoor course maintenance and project work to be completed.  The mild temperatures of early December soon ended with an extended period of cold, dry air which allowed the grass plants to harden off naturally into a reduced state of metabolic activity, thereby, decreasing the plants susceptibility to environmental extremes.  In essence, the plant is asleep for the winter and will awaken some time later depending on energy reserves, temperature and moisture.

These graphs for January show a pattern of extended cold temperatures with consistent
snow cover of 10 cm until the 11th of January when a 3 day stretch of unseasonably warm weather and rainfall removed all snow.  Fortunately, the soil had yet to freeze and all surface water drained through the deep-tine aeration channels provided to the greens in early November.

The bitter cold temperatures that followed the first rain event of the winter enabled the #10 Pond Project to be initiated and completed. This work required an extended period of very cold temperatures to expedite the dredging and construction process. 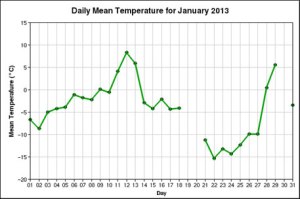 Thesnow fall in February far exceeded the amounts received in January. This insulating material helped buffer and insulate the grass plants from the fluctuating temperatures the month provided. There were however, two rain events in late February resulting in the formation of ice across the greens. 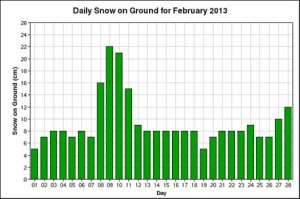 These two precipitation events produced over 20mm of rainfall.  The rain fell on an existing snow pack and penetrated to the frozen ground below.  Ice cover, Dessication and Crown Hydration can produce catastrophic losses to turfgrass.  The following link from Michigan State University describes various factors influencing “Winter Injury”. http://turf.msu.edu/winterkill-of-turfgrass

As can be seen from this picture a 1” layer of ice had developed in late February above the 14th green.  When gently removing the snow cover from the greens surface a footprint was discovered caused by an innocent walker who in fact formed ice from the compression of snow. 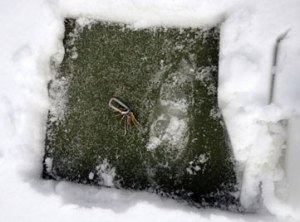 A test that many Golf Course Superintendents perform during late winter is to remove frozen cores of turf from a putting green surface and to slowly revive the plants from their winter state to check for signs of life. This test can give false positives as the plant can respond with signs of life (green shoots) that soon wither due to a damaged crown.  The crown is the meristematic region of the plant where all cellular activity and differentiation begins.  Without a crown there is no plant. 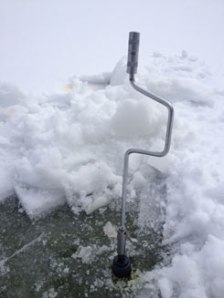 After 1 Day – The turf plug was washed in cold water and allowed to thaw in a cool window location. 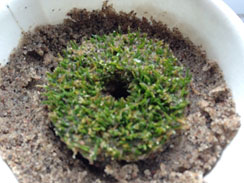 After 7 Days – The plants are greening up and have begun to initiate new rooting. An early sign of life that we hope extends to other areas of the golf course during the eventual spring thaw.

All cultural practices will be carried out in such a way as to minimize the impact to Membership with the ultimate goal of providing superior, healthier playing surfaces.